When I started to learn WinForm programming, one thing that I wondered was how to create additional window forms on already existing Winform Project. For example I wanted to create a popup window for editing purposes. I knew what code to write that would instantiate a new form but didn't know how to edit that form in the designer.

In this article we are going to create a Winform Project from scratch that will contain main form and also one additional regular form which will act as a popup dialog window with  OK / Cancel buttons. This popup dialog box will be shown when button on the main form is clicked. When the popup window closes, the main form will check which button (either OK or Cancel) was clicked. 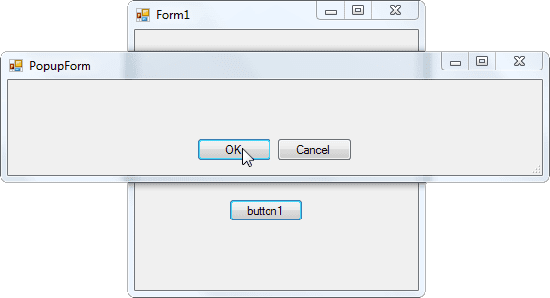 Note:In the real world application you most likely will not create these kind of simple Dialog boxes as shown here but would instead just call a static method MessageBox.Show.

Now Let's examine the above code more closely by focusing on highlighted lines 3, 4, 5 and 13:

I hope you found this article useful. If you still have questions, drop me a comment and I might include your problem with the solution in any future update.