This article is intended for beginners and will demonstrate how to create a Windows Forms / WinForms project using Visual Studio 2019 Community Edition, which is a free version of Visual Studio. The WinForms application created by Visual Studio will contain only a main form with no controls. Then in the future article, we will make this application a bit more interesting and useful.

Before we start creating a Visual Studio project, we need to make sure that the Visual Studio we have installed in our system is able to create WinForms projects.

What about creating a WinForms Project using Visual Studio Code?

I'm a big fan of Visual Studio Code and I did wonder if it's possible to create WinForms project with it. Visual Studio 2019 added the Windows Forms support to the .NET Core 3.0 Framework, so maybe it will be possible in the future, but at the moment, the answer is No as there is no VS Code extension available and there is no support for the WinForms designer.

Making sure the .NET desktop development workload is installed for Visual Studio

It is assumed you have installed the Visual Studio Community 2019 in your system and that you have selected the ".NET desktop development" workload during the installation.

If you need to install Visual Studio Community Edition, make sure that during the installation, you select the .NET desktop development workload as we are going to create a WinForms project using the standard .NET Framework.

Note: Starting by Visual Studio 2019, the WinForms support was added to the .NET Core 3.0, so if you have ASP.NET and Web development workload installed, you can make the Windows Forms projects using .NET Core framework. Be aware that there are some breaking changes from the classic WinForms .NET Framework. 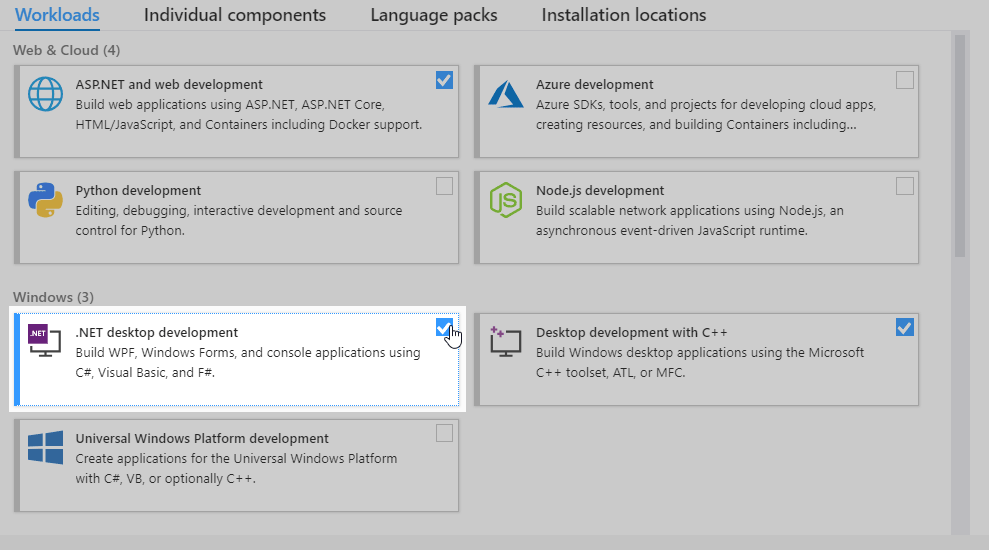 If you already have Visual Studio installed, but you are unsure if a desktop application workload is installed or not, go to the next step to create a new project in VS. If you will see WinForms templates available, you are good to go.

If WinForms templates are missing, no problem, you should be able to easily add them by modifying the Visual Studio installation using these steps:

Now, let's create a WinForms project in VS.

Creating a WinForms Project in the Visual Studio

The steps to create a new WinForms project are as follows:

After some processing, the Visual Studio should create a new Windows Forms project and it should look something like this: 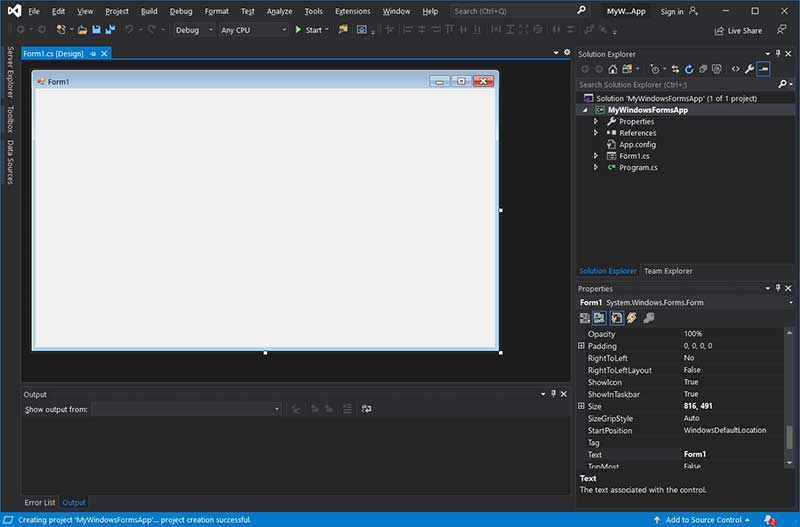 Now, let's quickly explore the opened project in VS.

As you can see from the image above, we have an open tab named Form1.cs [Design] containing the main form of the project. The [Design] in the name tells us the Form1.cs is opened in "Designer mode", so we can drag & drop other controls to the Form and setting properties to those controls or the form itself.

The WinForms project created by Visual Studio auto-generates enough code for us to start the desktop application. We build and run the project in different ways:

The running project will consist of our main form as shown below. 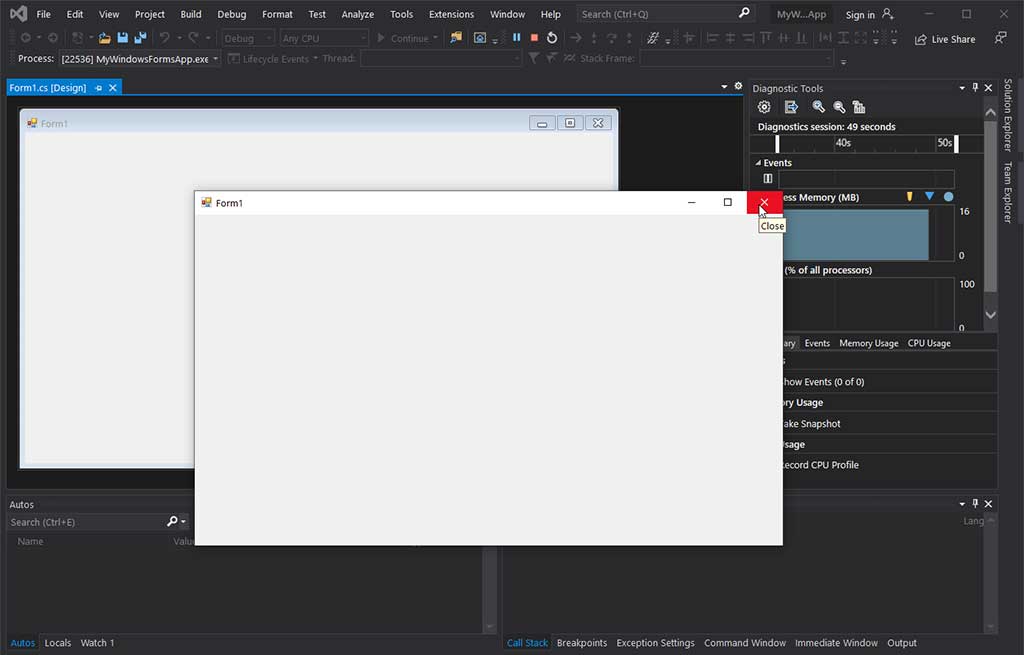 By clicking on the red X close button on the top right corner of the Form1 windows, the application will close.

In the future article we will learn how to add additional WinForms controls into the main form and make the desktop application a bit more functional by adding a button to it that will display a pop-up window when clicked.

To learn a lot more about WinForms, I suggest getting a dedicated book. Unfortunately, there doesn't seem to be any books specific to Windows Forms published for a long time now. There are two available on Amazon, one is Windows Forms Programming in C# and the other .NET Windows Forms in a Nutshell both written just before the .NET 2.0, which was the last version that WinForms Framework had any updates to it. So, while the descriptions in the books on how to use Visual Studio are outdated by now, they should still be relevant when learning about the WinForms Framework itself.

In this article we learned how to create WinForms project using Visual Studio and what to do when the WinForms templates are missing in Visual Studio. After the WinForms template was chosen, we configured a project by giving it a name and the location of the project. Finally, with the Windows Forms project in VS successfully created, we learned how to build and run it in three different ways. Amazon Associates Disclosure:
HowToSolutions is a participant in the Amazon Services LLC Associates Program, an affiliate advertising program designed to provide a means for sites to earn advertising fees by advertising and linking to Amazon.com