I was working on my ASP.NET MVC application recently and I needed to do some serialization / deserialization work on JSON data. I chose to use Json.NET, a very popular JSON framework for .NET. The problem was that when I ran the application, I was getting an exception telling me that the Newtonsoft.Json could not be loaded due to assembly's manifest definition not matching the assembly reference. In this article, I will show you what I tried and how I managed to solve the problem.

I installed the Newtonsoft.Json library from a NuGet Package on the class library that was used as a business layer. This way, I was separating the business logic from the ASP.NET MVC project that was on the same solution.

The exact error message, the Visual Studio was giving me was this: 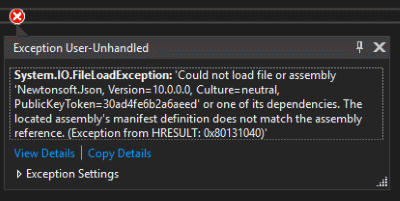 System.IO.FileLoadException: 'Could not load file or assembly 'Newtonsoft.Json, Version=10.0.0.0, Culture=neutral, PublicKeyToken=30ad4fe6b2a6aeed' or one of its dependencies. The located assembly's manifest definition does not match the assembly reference. (Exception from HRESULT: 0x80131040)'

On the web, I found few suggestions.

But, when I expanded the References section of my business layer project in Solution Explorer to check the assembly version, the Properties windows for the Newtonsoft.Json assembly was displaying a different version of 10.0.0: 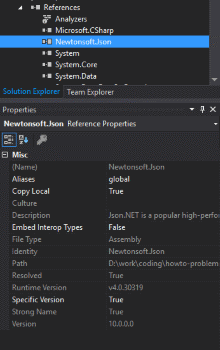 There were also suggestions on the web to check if in the Properties Windows, the "Copy Local" property is set to True, which it was.

So being stuck, I thought, let's try to reinstall the Json.NET package and hope for the best.

That also didn't solve the problem.

So then I wondered, what would Windows Explorer show, when I check the properties of the Newtonsoft.Json.dll file be in the bin folder of the project and it was showing 10.0.3 version, same one as inside the packages.config file.

I'm not sure why the Properties in Visual Studio was showing 10.0.0 version, but it seemed the version in the business layer was not the problem. So I turned my attention to the ASP.NET MVC project, since it was referencing the business layer and called objects that use Json.NET.

I quickly noticed that there was also a reference to Newtonsoft.Json assembly in the ASP.NET MVC project, even though it was not added by me. It turns out, when creating the ASP.NET MVC project, the Visual Studio will automatically add various packages, among them the Newtonsoft.Json library. The problem was that the version Visual Studio installed was the old version 6.0.4, while in the business layer, the version used was 10.0.3.

In the end, the solution was to update it to the latest version, using the following steps:

After the library was updated to the same version as the one in other project, the problem was resolved.

Have you had the same exception while using Json.NET? How did you solve it? Drop a comment and let us know.