To interact with Flutter, we use the flutter command-line tool. We can give it a variety of commands, but the focus will be on the flutter create command. First, we'll go over how to use it to create new Flutter projects and then we'll go through the list of the command line arguments available for the create command with additional information provided for some of them.

The flutter command-line tool is mostly used to manage app development by giving it a command followed by arguments:

To list all the available commands, we type in the terminal:

The flutter CLI has many commands, here are commands that deal with projects:

The rest of this post will focus on the flutter create command.

Note: We can learn more about each of the commands by typing the following in the terminal flutter help <command>.

Creating a project with the flutter create command

We use the "flutter create" command to create a new Flutter project. If the project already exists, any missing files will be recreated. We use it like this:

To create a default app Flutter project, we may ignore the arguments and only specify the output directory where all the project files will be created.

The output directory must contain a valid dart package name (all lowercase with an underscore between words), for example:

A project named my_start_app will be created inside the directory with the same name.

Note: We can use the --project-name argument to have the output directory name that is different from the project name and does not obey this requirement (for example, if we wanted to have MyApp as an output directory instead of my_start_app).

Running a project with the "flutter run" command

After creating the project, go inside the newly created project folder and run the project:

The flutter should now ask you on which platform you want to run the project.

Note: Which platforms will be listed depends on what is installed in your system. For Windows (desktop), Visual Studio 2019 or higher is required, while the Android virtual device (AVD) needs to be running for the Android mobile app.

After selecting a platform, the project will run in debug mode. The project itself will be a fairly simple counter app as seen below: 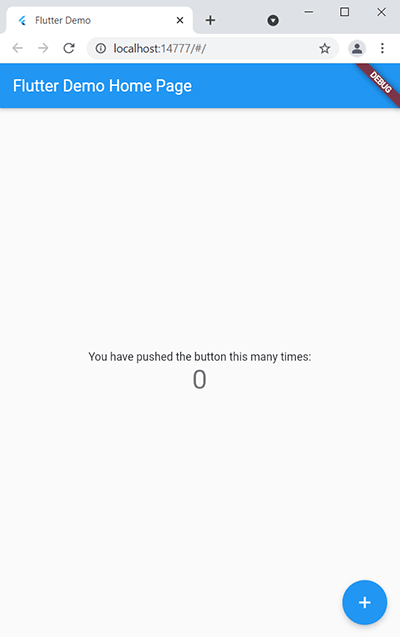 The starting point for the project is located at lib/main.dart file. This is where you'll find the counter app's logic and user interface.

Let's turn our attention to the command-line arguments.

Below is the list of all the available parameters for the create command:

In this section, additional information for some of the command-line arguments mentioned above has been added. Not many arguments are in this section currently, but more might get added in the future.

This command, as the name implies, deals with samples. A sample is useful if we want to develop a starting Flutter project for a specific widget instead of the basic counting app.

To use the --sample argument, we need to provide it with a valid id of the sample.

For example, to create a project with the sample of SingleChildScrollView widget, we would give the following flutter command:

Note: Learn more about which id's are valid when creating a project with --sample parameter.

With Flutter version 3.0.3, there are 543 samples with some widgets having more than one sample to demonstrate different settings and some widgets will also have samples for "material", "cupertino" & "widgets" libraries while using the exact same content of the main.dart source file.

We can use the --sample command to generate a list of all available samples in JSON format.

The <path> specifies the location of the JSON output file where the list will be saved.

Here's an example of an entry from the created JSON file:

When creating a new project with flutter create, we must specify the output directory. This will create a folder that will contain the Flutter project with the same name. The project name needs to be a valid Dart package name (lower case with underscores), otherwise. we get an error.

For example, if we try to create a TestApp project:

We get the following error message:


"TestApp" is not a valid Dart package name.

We can use the --project-name argument to provide the Flutter with the valid dart package name and at the same time give a folder name that does not follow the dart package naming requirements.

In the previous example, we could create a folder TestApp but have a project with a valid dart package name test_app using the following command:

Another use of the --project-name argument is when we want to create all project files in the current directory. We just put the . (dot) for output directory like so:

In this tutorial, we looked at all of the available commands for the flutter command-line tool. Then we focused on the flutter create command which is used to build new Flutter projects. We then listed all the options available for it and for some of them, additional information has been provided.